I find it very easy to become alarmed, if not downright frightened, about the state of current affairs (using this term as broadly as possible) of contemporary society by following traditional or social media. We are constantly being bombarded with horrific acts of violence, struggle, and poverty. The divide between the rich and the underprivileged has never been greater. Equality and prosperity seem like far-fetched dreams. The planet is dying and we are hurrying its demise.
Are we truly living an apocalyptic dystopia and are the prophets of doom and gloom right?
No.
The premise of Steven Pinker’s “Enlightenment Now” is the outrageous claim that we (especially “we” in the Western World) live in the best possible times that human history has seen. Rather than letting the news, social media activists or celebrities shape our world-view, Pinker tries to show that a completely different story unravels by turning to the actual statistics about what is happening on the planet. “Factfulness”, by Hans Rosling, explores the same themes and provides some nifty little charts that I will also use below.
While it’s true that a divide between the extremely rich and the poor is clearly visible, both these categories are extremes. Not only is capitalism working, making poor people richer, it’s enabling more progressive attitudes towards society and providing access to education for a higher number of people. The number of people struggling with poverty is decreasing while the rest enjoy fewer working hours and a higher life expectancy. 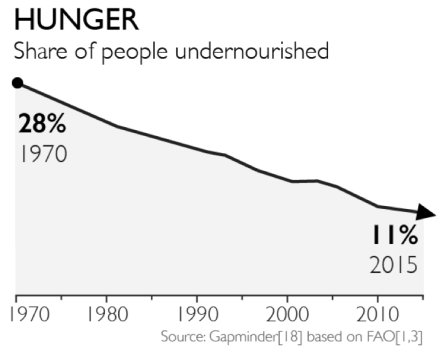 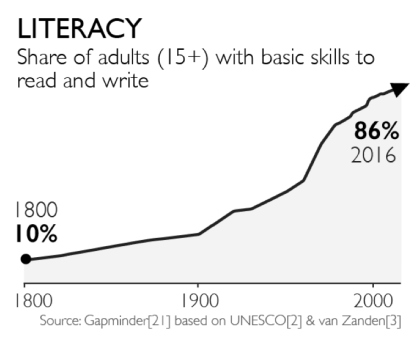 Society is also much more tolerant and egalitarian and enjoying a prolonged international peace. While horrible, acts of terrorism are always about the spectacle and fear-mongering and almost never about the number of casualties. People are much more likely to die of obesity than hunger, of diabetes than an armed conflict, or be killed by their own hand than perish in a terrorist attack. 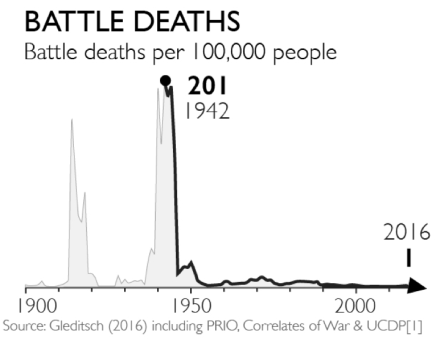 Incredible progress has been made in the field of medicine as well. With the exception of the recent “anti-vaxx” wave, which thankfully has not blown to global proportions yet, immunization has grown and we have eradicated smallpox. Child cancer survival rate has grown impressively.

What about the environment?

During the Cold War, prophecies of nuclear apocalypse were so commonplace that great portions of the populations internalized the hysteria and accepted that wiping each other from the face of the planet was a mere matter of time. Indeed, many intellectuals prophesied this. Yet here are. Irregardless of what the subject matter of hysteria was, all doom prophets have been consistently wrong across all time. The hysteria we are currently dealing with is in regards to our changing climate. Since we have become aware of the importance of the issue and started working on it, however, we have achieved both a diminishing in the use of ozone-depleting substances which led to the healing of the layer, and we have made the Earth greener than it was 20 years ago. 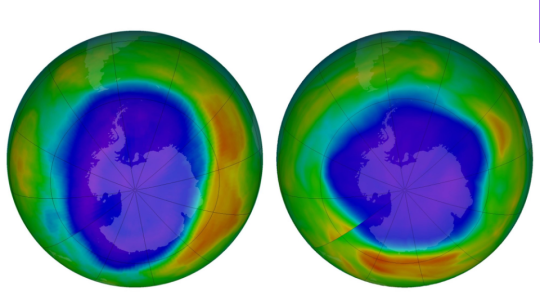 The main problem is the sheer scope of the issue. Climate change is incredibly complex and has profound ramifications not only in ecology, but in economy and industry as well, just to name the two most obvious one. But most importantly, there is the political aspect. The discourse of the extreme hysterics is, firstly, an over-simplification to the point of the absurd, meant to appeal to fear with sentiment, rather than to appeal to the intellect with data. Their rhetoric has become so toxic in their philosophical conclusions that there are now groups of “anti-natalists” trying to convince us not to have children in the current conditions because of the bio-ethical implications. Ironically, since solving climate change is such a challenging problem, what is needed is more intellectual power (ergo, more people).

Secondly, it is also used, as Jordan Peterson suggested in an interview, as a “secondary, anti-capitalist front”. Supporters of climate change action accuse countries and companies of malevolence in refusing to cut down the fossil fuel that supports industry for the benefit of renewable sources of energy. The phrasing here is again misleading: while it is true that, presently, adoption of renewable sources of energy (wind and solar, with no CO2 emissions) falls under 2%, capitalist greed may not in fact be the reason for it. The process of turning sunlight or wind into energy is highly expensive, compared to the other processes we have established (nuclear, fossil fuel, hydroelectric) and the energy produced is diluted, with intermittent generation. What that means is that it requires a backup source of reliable energy production, which is usually coal. Hence, paradoxically, adopting wind or solar will make fossil fuel usage increase, not decrease (see the case of Germany).

Bill Gates himself reached the conclusion that the best solution to the problem lies in nuclear energy and is currently investing in a new design that would not let radioactive fallout out into the world in case something horrible happens. A lot of scientists have been proposing innovation in nuclear for quite some time now, however the problem with it, and what leads us the the final point of this short article, is the negative perception among the masses.

If we’re making so much progress, why do people succumb to pessimism and hysteria?

People will admit they are afraid of flying, but rarely of driving, even though being in traffic is infinitely more likely to kill them than being in an airplane. That’s because sentiment, impressions, and fear have a much more powerful hold over us than numbers, charts, and statistics. In “Factfulness”, Hans Rosling underlines a few important points about how our perception of reality clashes with the image of reality modeled by data:

Neither Rosling, nor Pinker (nor any other serious academic or scientist, for that matter) suggests that everything is amazing and we should all call it a day with a self-congratulatory grin on our faces. Problems are an intrinsic aspect of our existence, but out ability to tackle them is one of the things that makes us so incredibly unique. The purpose of their exercise, which I misrepresented here by reduction, is to help us consider things from the perspective of facts and data, to acknowledge that progress is being made and the world may not be as bad as we think, and to prevent us from yielding to manipulation.

My notes on “Enlightenment Now” (in Romanian): https://negofelix.com/2019/03/02/steven-pinker-enlightenment-now/

Where can I consult the data myself?